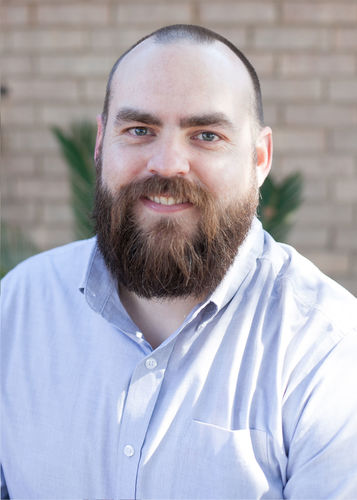 John was born and raised on the outskirts of Oklahoma City, Oklahoma.  Occasionally attending church throughout his childhood (typically small Baptist or Nazarene Churches), it wasn’t until his Junior year in highschool that he began to regularly attend Church.  By this time in his life, John had been “saved” 4-5 times by walking down various aisles in response to altar calls, professing a belief in Jesus. Unfortunately, these efforts, on his part, failed to result in a changed life.

John attended the University of Oklahoma where he graduated with a Bachelor of Science in Nursing.  He also joined ROTC and commissioned as a 2nd Lieutenant in the United States Air Force.  It was during his time at OU that the Lord began to work in John’s life.  He committed his life to Christ, was baptized, and began to study, understand, and come to know his Lord and Savior Jesus Christ.  John was introduced to the doctrines of grace by a Reformed University Fellowship campus minister.

While at OU, John met Kara, and the two were married during his “first” senior year.  After graduation, John and Kara moved to Anchorage, Alaska for his first duty station in the Air Force.  Their daughter Rayna was born there. The three PCS’d (military moved) to Lackland Air Force Base in San Antonio.  The Lord led them to Grace Baptist Church, where they have been members since 2008. John served 2 tours in Iraq and Afghanistan during this time.  John and Kara’s son Emmett was born shortly before his second deployment. John separated from the Air Force in 2013 and took a civilian job with the US Army at Ft. Sam Houston where he currently works as a Registered Nurse in the Trauma ER.

John has spent the last 10 years studying under the guidance and tutelage of Pastor Tim Goad.  The two have enjoyed a close discipleship/mentorship relationship. John served as a Deacon at Grace Baptist Church until he obediently answered God’s call into the ministry.  John was installed as an Elder by the church in November 2018. John, Kara, Rayna, Emmett, 8 cows, 30 chickens, 1 dog, and a rabbit named Caramel live on their farm in Seguin, Texas.